Can you believe it's already October?!

With Fall in full swing, now comes the hockey schedule haha. Don't get me wrong I love that Ryan plays hockey, I'm just not 100% percent comfortable in the apartment yet and when I'm alone I scare myself easily! Anyways, Friday night he left for hockey and I needed to catch up on my Thursday night guilty pleasures a.k.a Grey's and Scandal. Let me just say, its good Ryan wasn't around to witness my emotional breakdown for Grey's (I won't ruin it for those who are still catching up). After my shows were over it became a game trying to find something to watch and quickly racing to find the remote as soon as a scary movie trailer came on, I swear I love this time of year but the movie trailers that come along with it...no thank you! So I settled on the Disney channel (don't laugh) its the only station without scary movie trailers...am I right?! Ryan came home and I'm passed out to the Disney channel haha.

Saturday we went down to UCONN to visit Ryan's sister who had just turned 21. It was a nice day, the rain held off for the most part. We went out to a late lunch and had cake back in her dorm. Its always good to visit her! That night we just relaxed and caught up on TV shows. Relaxing nights are always good before our usual busy Sundays.

Sunday was the usual, we went and visited with Ryan's parents before we made our trek to Wegman's, once the grocery shopping was done we rushed home just in time for the Patriots game. I made fried green beans which were surprisingly easy, I left the recipe at home but will post later. Once I digested from the green beans and wings, it was time to bake my apple crisp. I had been wanting to try baking one since last fall. I tried one last fall but it just didn't come out as well as I planned. So I tried another recipe. I used this recipe here. It turned out amazing! It was a great dessert to our Sunday dinner. 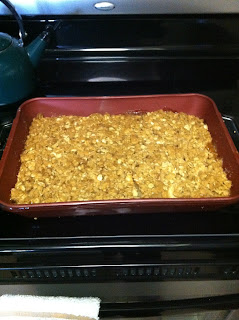 Right out of the oven! 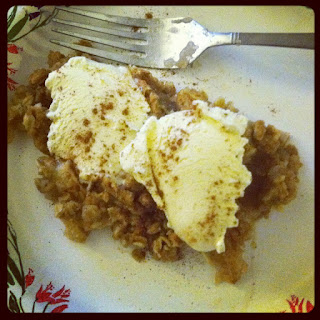 Well I guess I should get back to work. Its not going to finish itself, even though that would be amazing!

Mollie Campbell
Marlborough, MA, United States
I am a twenty-four year-old with a passion for great food, deep laughs, true love, family and friends and everything in between. Follow my adventures on Twitter and Instagram at mollcampbell